Blog Home » Editor's Pick » A guide to food in Cuba: what to expect on vacation

A guide to food in Cuba: what to expect on vacation

If the only thing you know about Cuba’s food is that your friend recommended you bring your own spices, you don’t know enough about Cuban food. While other countries, like Jamaica and its famed jerk chicken, are known for a local food and rich spices and flavour, Cuba’s poor food myth is indeed just a myth.

So, why do travellers taking a vacation to Cuba think that they’re going to eat poorly?

One of our travel agents explained it this way: “it is not awful; it’s healthy. There’s no MSG, preservatives, extra salt, and so on. So compared to North American, it might taste bland, but it’s simply just real, whole, healthy foods.”

Cuba’s political and economical landscape are to blame, with the limited food supplies and preservatives they are able to access. The U.S. Embargo makes it virtually impossible to get some ingredients in the country, while the lack of flavour or use of spices is often just due to the Cuban’s disinterest in hot, spicy food. Cuba also has a conservative attitude when it comes to food, meaning there isn’t much interest in experimenting with flavours, ingredients, spices, and new recipes. Rather than focusing on what you won’t be able to eat while on your Cuba vacation, why not focus on the mounds of fresh fruit, fresh juices and famed Cuban coffee. 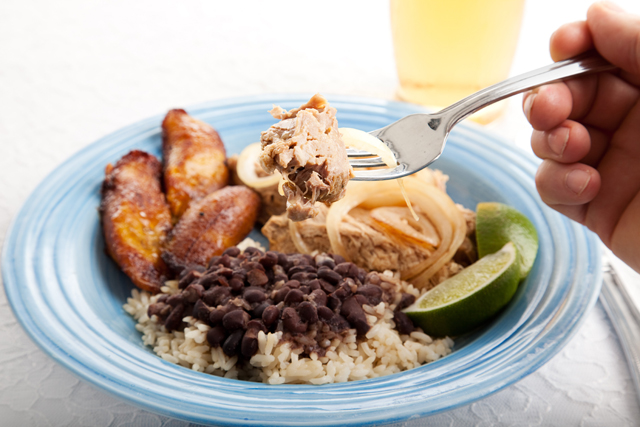 Rice and black beans are two of the most common Cuban dishes, and often served with every meal. There are nearly 20 different classic rice dishes in Cuba, while black bean “stew” is often served as a side. Pork and chicken are the most popular meat dishes, followed by seafood, but it’s worth noting beef is rarely found.

One of our travel agents joked that you won’t gain weight on vacation in Cuba: the wholesome, natural food means you’re not as likely to overeat.

Best resorts for food in Cuba

Cuban food and the best food in Cuba is also heavily dependent on what part of the island you are visiting. In Varadero, many hotels do not see return guests year after year, and with more hotels than other tourist areas of the island, oftentimes food is not a priority in terms of budget or quality. Cayo Coco vacations and Cayo Santa Maria all-inclusive resorts are going to have higher quality food than other parts of the island, because of the lack of access to a city center or other dining options.

The best food in Cuba is also a matter of you get what you pay for: Iberostar resorts have better food than smaller chains. Paradisus has higher quality chilled tables and shaved ice trays, whereas a smaller resort like a Sol resort isn’t going to serve as high of quality, or as much variety.

We asked our travel agents for the top resorts in Cuba for food:

An all-inclusive resort in Cuba is going to have more than just the traditional meal options of Cuban food. For breakfast, many resorts will offer a selection of fresh fruits, eggs, cold cereals, and cold plates of sliced meats. Lunch and dinner are often not differentiated and could be anything from pasta dishes to other international food, with sides of rice, beans, and hearty meat. The most common drink, of course, is rum, but Cuba also produces excellent coffee.