Toronto is more than just a concrete jungle: there are hidden gems in each neighbourhood, culture found around each corner, with countless tourist attractions and things to do for the whole family, and travellers from near and far. Our Toronto travel guide highlights the best things to do no matter how much time you have in the big city.

Toronto is known for its Maple Leafs hockey team, the CN Tower, its zoo, and the broad range of food as unique and different as each area of the city. It’s a popular setting in movies, and a prized city in both Ontario and Canada, welcoming thousands of visitors each year. 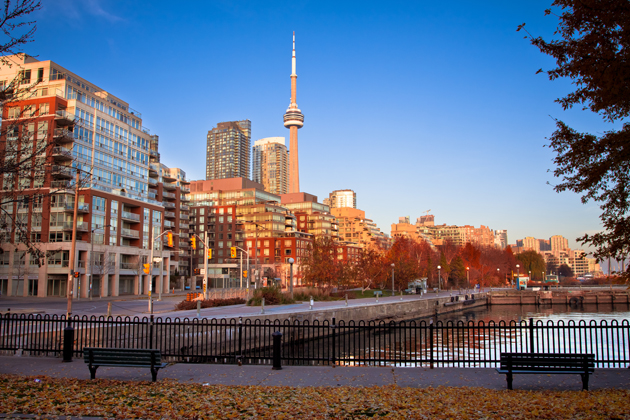 Find up-scale shopping, escapes into nature, museums, and city nightlife in Toronto. It’s the perfect destination for travellers without a passport, offering as many attractions as many cities around the world without the hassle of borders. With the busiest Canadian airport, Toronto is easy to get to and perfect for a weekend trip or a longer vacation: whatever you’re looking for! Every corner you turn and street you explore is a new neighbourhood or pocket of the city, each known for something different. In Toronto, the city is bustling 365 days of the year. If Toronto isn’t already on your travel list, let us convince you to make travel plans to visit with our Toronto travel guide.

What to do in Toronto

There is no shortage of activities and things to do in Toronto: from museums, to art galleries, walking tours, sporting events (no matter the time of year), and sightseeing. If you’re travelling alone, Toronto’s attractions and days at the museum or exploring the city’s renowned areas will keep you busy, while families will delight in the countless children-focused activities like the Ontario Science Centre, or Canada’s Wonderland. Couples looking for a romantic escape will find higher-end restaurants, spas, shopping, and romantic walks along the Toronto Harbour, while those looking for a high energy weekend away will be kept busy with nightlife, entertainment and shows, and some of the top attractions.

Ripley’s Aquarium of Canada: Perfect for families or adults, marvel at the wonders of the deep blue sea at Ripley’s Aquarium, located at the base of the CN Tower. With exhibits from Canadian waters to coral reefs, a shark tank, and a jellyfish exhibit, we could spend hours at the aquarium. 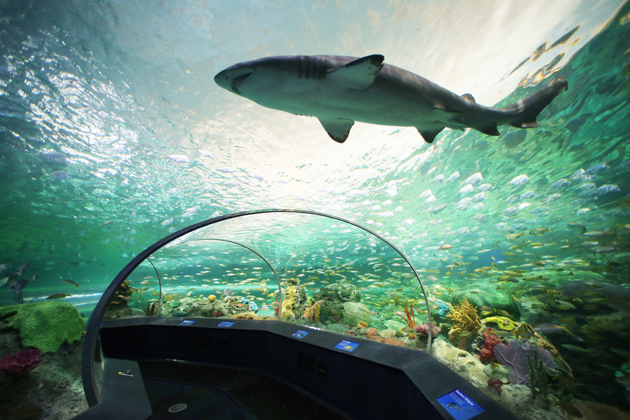 Eaton Centre: Home to over 230 stores and restaurants, the Eaton Centre is an exceptional shopping centre with larger chain stores, individual stores and international retailers.

The Bata Shoe Museum: With so many museums, we couldn’t possibly list them all! The Bata Shoe Museum is a must-visit though for the shopaholic or historian, whether you have a shoe collection at home or stick with your favourite pair. With over 1,000 shoes and a collection of artefacts reaching 13,000 items, the museum focuses on historical footwear like Chinese binding and Egyptian sandals to famous shoes. Put your best foot forward and visit!

The Royal Ontario Museum (ROM): The Royal Ontario Museum focuses on natural history and world cultures, with exhibits ranging from dinosaurs to Asia’s samurai history. With great educational programs, camps during summer and March Break, tours, and specialized adult programs, the ROM is a place of learning and fun. Plan to spend at least a few hours at the museum to see all exhibits, even quickly.

Toronto Zoo: Lions, tigers, and bears, oh my! Visit the famous Toronto Zoo and see over 5,000 animals and over 500 species. Perfect for a family vacation or friends or adults day away, the Toronto Zoo is as educational as it is fun. Don’t miss the giant pandas, activities and rides, and special events to support animal conservation. 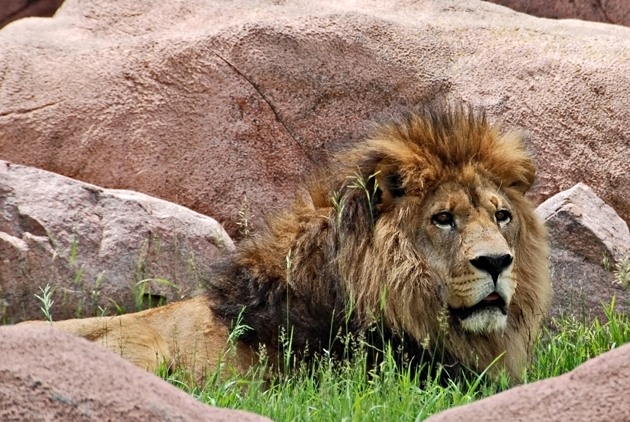 Canada’s Wonderland: Take the family or friends to Canada’s Wonderland, an amusement park with over 200 attractions, 69 rides, and a 20-acre water park. With rides ranging from kid-friendly to adrenaline-rushing, the park is open June through October, with open times and dates changing depending on the season.

Canadian National Exhibition: Famous for its wild food pairings and ideas, visit the CNE to celebrate the end of summer with rides, exhibits, food, animals and acrobatic shows. Kick off fall with this age-old tradition and fun for the whole family.

Out of town visitors to Toronto might also opt to take a Toronto City Hop-on-Hop-off Tour with stops near all the major attractions and explanations of different areas and neighbourhoods of the city. A harbour cruise or helicopter ride to see the city from a different view are also popular. Plenty of walking tours are also available to explore specific parts of the city.

A Niagara Falls Tour from Toronto is another popular option for travellers from out of province. Niagara Falls and the Niagara-On-The-Lake area is only two hours from the downtown Toronto core, making an easy day trip to see one of the Seven Natural Wonders of the World and an exciting Toronto travel excursion. 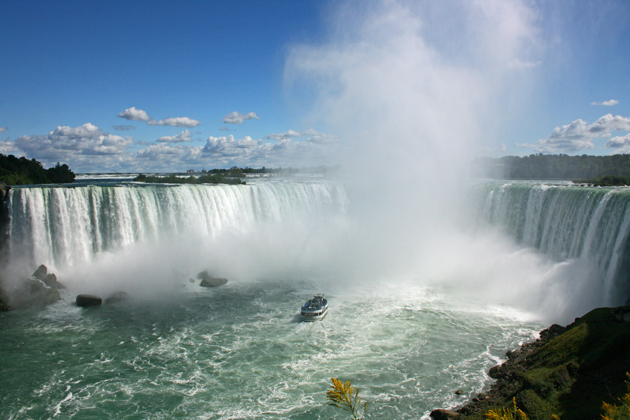 *TIP: Buy a Toronto CityPASS and save 45% on admission on the city’s top 5 attractions: CN Tower, Royal Ontario Museum, Casa Loma, Toronto Zoo, and the Ontario Science Centre. The pass is valid for 9 consecutive days from the beginning of the first day of use. You won’t only save money but receive a booklet full of transportation information, hours, and more to plan your vacation around these things to see in Toronto.

What to see in Toronto

Travellers interested more in nature than skyscrapers can head to the Toronto Islands or Beaches for nature paths, parks, beaches, and fresh air, or zip outside the city to one of the Greater Toronto Area’s many golf courses, including The Royal Ashburn, named one of the top 50 in Canada.

Toronto is also full of street markets and neighbourhoods, each with their own culture and draws. A well-rounded trip of Toronto will include walking through a few of these areas. 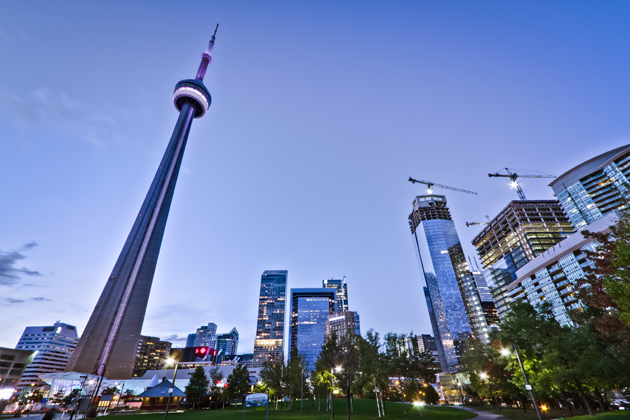 Chinatown is home to ethnic food, markets, restaurants, and plenty of traditional arts and crafts in its popular downtown location, while Bloor-Yorkville is another popular neighbourhood known for its higher-end shopping, cafes, restaurants, and business feel. Bloor between Yonge Street and Avenue Road is known as Mink Mile, one of the most prestigious shopping areas in the city, home to Tiffany’s, Gucci, Louis Vuitton, Chanel, and Holt Renfrew, among others.

The St. Lawrence Market may be the most popular of the Toronto neighbours and markets, home to over 100 vendors, artists, farm stalls, butchers and bakers. Visit for your weekly groceries, lunch, or to shop and as a tourist attraction in this historic building, which saw the market get its start in 1803. The Kensington Market is another popular area known for its outdoor market full of vendor stalls, arts, crafts, clothing, and food.

The Distillery District is another distinct part of the city to add to any Toronto travel itinerary. This historic downtown area is known for its cafes, restaurants, and pedestrian-only area. Home to several breweries, wander this area and admire historical buildings and local brews. The popular Toronto Christmas market is held here annually, as well.

Venturing outside of the city limits may take Toronto travellers to Algonquin Provincial Park or the Muskoka region of Ontario where camping, hiking, canoeing, and cottage country are plentiful.

When to visit Toronto?

A Toronto vacation is perfect for over a weekend or up to 5 days, depending on how much of the city and its attractions you’re hoping to visit.

Spring and fall are high-times for sports and outdoor activities, while the summer months see highs in the high 20s, and September sees averages of 21C and lows of 13C. Other high travel times for Toronto include Christmas, for the famous Toronto Santa Claus Parade, and New Year’s Eve in Nathan Phillips Square.

Toronto travel is often booked separate; flights or transportation into the city, and hotels. Travel by foot and public transportation is all that is needed for the duration of a stay within the city, but car rentals are available from Toronto Pearson International Airport and downtown locations. Traffic and high parking costs downtown and at hotels may make travelling by vehicle difficult, though.

Some popular subway stops for the top places to visit in Toronto are:

A visit to Toronto is usually a complete vacation in itself with so many places to visit, but can also easily be partnered with a day-trip to Niagara Falls, or a short vacation to Ottawa, a 5-hour drive, as well.

Most flights into Toronto arrive at Pearson International Airport, while shorter routes may fly into Billy Bishop Toronto City Airport. Flights from all Canadian gateways arrive at Pearson daily, while flights into the City airport are less frequent and on smaller flights (ie. A Porter flight from Halifax arrives approximately 6 times daily, while travellers from Montreal arrive on Air Canada approximately 12 times daily.) Toronto Pearson sees international flights from all major international airports arrive, as well.

Getting into Toronto from Billy Bishop Toronto City Airport:

From the City airport, travellers take a short ferry (121 metres) to downtown Toronto, landing at the base of Bathurst Street. The ferry is free for pedestrians and $11 for vehicles, running every 15 minutes. Car rentals are also available both on the island and mainland at the ferry terminal. Travellers looking for a taxi to their final destination in Toronto, find taxi stands just outside the ferry terminal in downtown Toronto.

Getting into Toronto from Pearson International Airport:

The Union Pearson Express train runs from terminal 1 at Union Station, with two brief stops at the Bloor Go Station (near High Park) and the Weston Go Station (near Lawrence Avenue West). One-way adult fares are $19 with a PRESTO Card and $27.50 without. The ride between downtown Union Station and Pearson is 25 minutes.

Taxis and limousines are available at both Terminal 1 and 3, in addition to car rental offices. A taxi from the airport to downtown will cost approximately $50 and, depending on traffic, requires approximately 40 minutes.