Posted by Laura Cooper on Nov 10, 2015 in Featured, Our Travel Lists

Ever wonder who else has stayed on the feather pillows where you rest your head during vacation? We have, and our curiosity led us to some research on the Canadian history of the Fairmont Hotels brand, and what royalty and other famous heads have laid down within the walls of their luxury hotels across Canada. 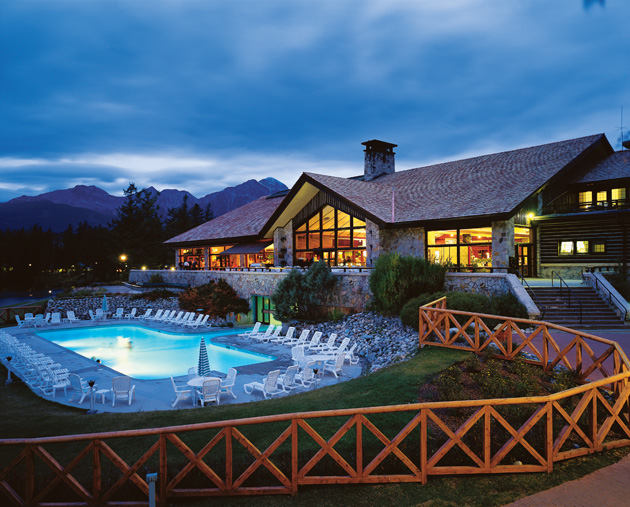 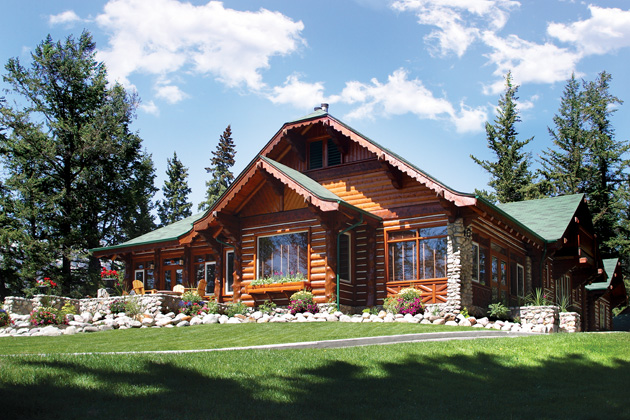 Celebrate the Fairmont Jasper Lodge’s centennial year in 2015 with an Alberta vacation and walk through the halls where both royalty and celebrities once walked.

The Fairmont Jasper Lodge, which began as ten large luxury tents in 1915, called Tent city, grew over time to be 8 log cabins owned by the Canadian National Railways, and officially opened as the Jasper Park Lodge in 1922. The lodge, now situated on 700-acres amid the Rocky Mountains and a UNESCO World Heritage Site, has been the set of countless historic movies and host to actors and actresses over the years including “River of No Return” starring Marilyn Monroe and “The Emperors Waltz” with Bing Crosby. (There’s a Crosby Cabin on site).

Royal visits to the Jasper Park Lodge began in 1939 with Queen Elizabeth and King George VI, followed by the 2005 visit by Queen Elizabeth II, and Prince Phillip. Both Queens stayed in the Outlook Cabin, which has since been crowned the Outlook Cabin, the Royal’s Retreat. You’ll definitely be treated to Canadian luxury when visiting the Fairmont Jasper Lodge, and staying in cabins among the likes of true Kings and Queens.

Tip: Golfers looking for a bit of fame can take a swing at the world-famous golf course, designed by master course designer Stanley Thompson. 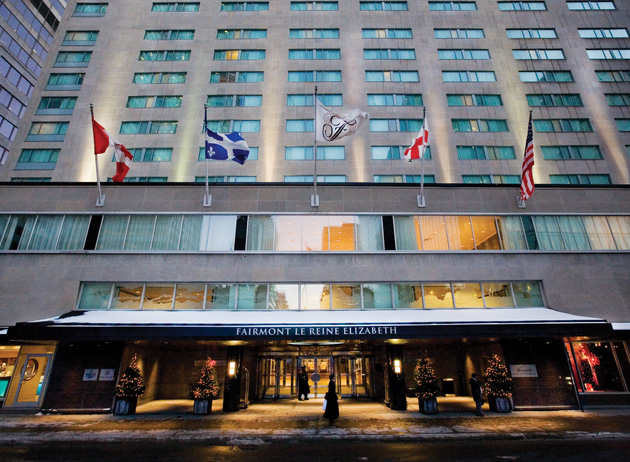 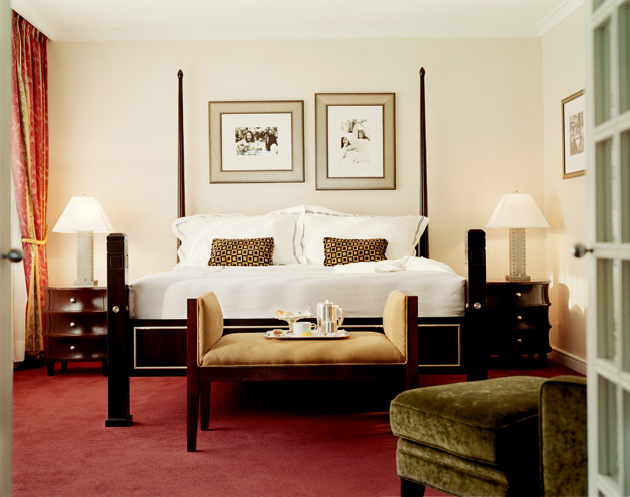 Located in a prime location downtown above the Via Rail station and a quick walk from the Bell Centre and the cheers of excited sports fans and concert-goers, find the Fairmont Queen Elizabeth standing tall in its history and fame. Music history fans may be interested in staying at this downtown Montreal hotel, the famous Canadian site where John Lennon’s historic “Give Peace a Chance” was written and where he and Yoko Ono held their second bed-in in 1969. A non-violent protest against the Vietnam War, the famous event came from the idea of sit-ins. Donned in pyjamas and with flowers scattered around the couple, they stayed in bed for 7-days to promote peace. The famous Lennon song on peace was both written and recorded within the walls of the historic Fairmont Queen Elizabeth during their stay.

Other famous visitors to Canada during this historic Fairmont hotels’ history of 58 years include the Queen Mother, Queen Elizabeth II, the Duke of Edinburgh, Princes Charles, Nelson Mandela, the Dalai Lama, Jimmy Carter, and John Travolta, among others. The Fairmont Queen Elizabeth hotel was also chosen as the headquarters for the 1976 Olympic Games and was host to many head of states during Expo 67.

Did you know? Visitors to the Fairmont Queen Elizabeth can rent Suite 1742, where John Lennon and Yoko Ono stayed, with the Bed-In for Peace Package, which includes accommodation, breakfast in bed, souvenir white pyjamas and nightgown, and a Lennon CD featuring “Give Peace a Chance.” Find the suite in the hotel by looking for the gold plaque on the door. Inside the suite, photos of the famous couple cover the walls and the hotel still has a copy of the security log with the couple’s room service orders from their time in Montreal. Also find a garden on Mont Royal in memory of the bed-in. 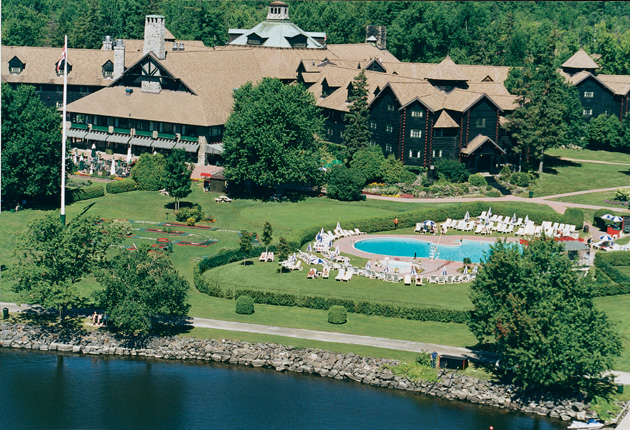 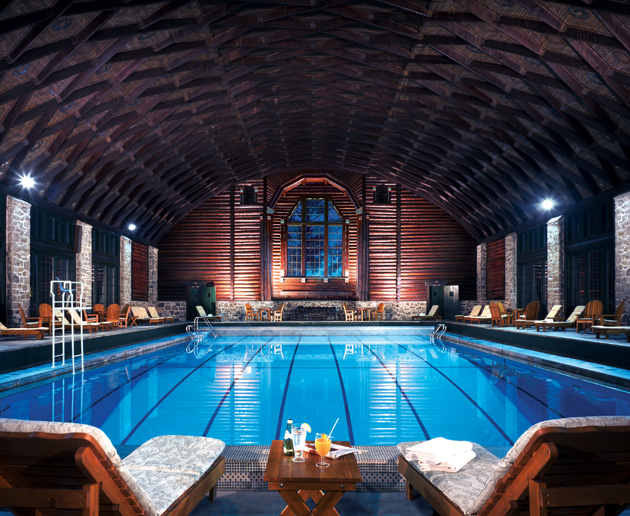 Kick back and relax in beautiful Montebello and learn a bit of Fairmont hotel history with a stay at the Fairmont Le Chateau Montebello. Founded as a private club in 1930, the history here dates back 85 years.

This historic Canadian hotel stands on the site known as Seigneurie de la Petite-Nation, which once belonged to founder of Quebec, Bishop Montmorency de Laval. The hotel was built in just three months, with teams that worked around the clock with overlapping shifts and electric lighting at night to guide the 3,500 workers that did the job. With the land eventually being passed down to Louis-Joseph Papineau, who held an important role in the Rebellion of 1837, the famous Manoir Papineau (or Manor House) was built in 1850 was built here. Today, it’s a National Historic Site of Canada and a museum, reflecting on life at the time for Louis-Joseph Papineau.

The historic Fairmont Le Chateau Montebello was built with 10,000 hand-cut red cedar logs transported from British Columbia by the Canadian Pacific Railway, and later was used as a private retreat for the Seigniory Club, which included Prime Minister Pearson. In 1970, the now historic Fairmont hotel opened its doors to the public for the first time, under the brand of Canadian Pacific Hotels. In 2007, Fairmont Le Chateau Montebello was host to the North American Leaders Summit, which saw President Bush, President Calderon and Prime Minister Harper in attendance. Today, the hotel stands proud along Canada’s Ottawa River, nestled amid thousands of acres of nature. Enjoy! Famous for its prime location next to Parliament Hill and overlooking the Ottawa River, the Fairmont Chateau Laurier has a long hotel history of famous visits. With the dramatic stone structure peaking above others along the downtown Ottawa skyline, we wanted to find out more about this historic Fairmont hotels’ history:

Opened on June 1, 1912 by Sir Wilfrid Laurier, the Fairmont Chateau Laurier in Ottawa is a National Historic Site of Canada. This hotel was one of the first hotels constructed by the Grand Turk Pacific Railway Company in an attempt to encourage travellers to travel the transcontinental routes. Follow the rail route today and find several Chateau-style hotels still standing, including this Ottawa hotel.

This downtown Ottawa historic hotel also has a unique connection to the Titanic: after the hotel was slated to open on April 26, 1912, it was delayed until June 1, after owner Charles Melville Hays perished in the sinking of the Titanic on April 14 of the same year.

Built with the finest of material; Italian marble, brass railings, and Czech crystal and Sevres vases, the hotel was one of the first hotels to offer indoor plumbing, and was also home to Canada’s CBC Radio for 80 years, where the shows were broadcast from the 7th floor.

Did you know? Guests can borrow an iPad from the front desk and take a self-guided tour with the hotel app and learn more of this Fairmont hotel’s history. Find the stunning French architecture of the Fairmont Le Chateau Frontenac within Old Quebec, a UNESCO World Heritage Site. With William Van Horne, president of the Canadian Pacific Railway, beginning the hotel’s historic construction in the 19th century, expansions continued until 1993, with the expansion for an indoor pool and fitness center.

Here you’ll find the Coat of Arms of Louse de Baude, Count of Frontenac, inside the entry arch, and a 300-year old stone bearing the Cross of Malta emblem among the interior stones of the vaulted lobby, but the history of this Quebec hotel go beyond the walls.

Alfred Hitchcock, Charles de Gaulle, Ronald Reagan and Queen Elizabeth are among the heads who have slept here, but the hotels history includes ties to the Second World War.

The Fairmont Le Chateau Frontenac was the action center of the Quebec Conferences during World War II, meaning Roosevelt, Winston Churchill, and William Lyon Mackenzie King roamed the halls here. Rumour has it that in 1943, Admiral Lord Louis Mountbatten dropped a chunk of Pykrete ice that was being made in Lake Louise in Winston Churchill’s bathtub at this hotel. (To the displeasure of Churchill, who was in the bath!) Who knew!

Do you have a story about staying at one of the historic Fairmont hotels? Share your experience in the comments below.